In his 89th year Herbert Steiner of Seattle, Washington, felt to commission international land artist Andrew Rogers of Australia to create land art on his property near Green River, Utah. Herbert came to love Green River, Utah and the Book Cliffs area after he retired from teaching school and traveled the country on Amtrak. He spent many pleasant days in Green River enjoying the spectacular scenery, walking the railroad tracks and enjoying the company of many good people of the town. Eventually he purchased 75 acres of land between the Interstate and the railroad tracks where Ratio would one day be built.

When contacted to consider the project,, Andrew Rogers was immediately interested and mentioned he even had a fossil from Green River on the wall of his home in Australia. Though he had never been to Green River, he studied photos of Herbert’s property and soon designed and sent plans for a spectacular creation called “Ratio” to be built as a permanent land-art project on the hill of Mr. Steiner’s property. Later he came to Green River and designated the exact site and orientation of the project.

Andrew Rogers is one of Australia’s most distinguished and internationally recognized contemporary artists. He exhibits globally and his critically acclaimed sculptures are in numerous private and prominent public collections in Australia, South East Asia, the Middle East, Europe, and the USA. He has received many international commissions and created “Rhythms of Life”, the largest contemporary land-art undertaking in the world, forming a chain of 47 massive stone sculptures, or Geoglyphs, around the globe. The project has involved over 6,700 people in 13 countries across seven continents.

Ratio is designed based on the Fibonacci sequence, a mathematical concept of universal significance similar to the Golden Ratio of science and mathematics. The Fibonacci sequence is found in numerous patterns in nature such as leaf arrangements in plants, the spiral structure of the nautilus snail, the florets of a flower and the arrangements of branches along the stems of plants, as well as the growth patterns in other living organisms. The sequence is regarded by many as representing a universal law of harmony in nature and art. The Green River Ratio Fibonacci sequence can be observed as the number of blocks in each succeeding column is the sum of the previous two columns, establishing the ratios of the sequence.

The project was constructed during the fall of 2010 and assembled on the hill on December 13 and 14, 2010. The contractors built Ratio using white cement powder imported from Kansas. The project consists of a solid foundation of black dyed concrete on which are assembled 53 concrete blocks, each weighing 4 1/2 tons. Each block is 39 x 39 x 68 inches and is stabilized by hidden tongue and groove construction with two-inch rebar through the centers of the blocks. The center column consists of 13 blocks reaching 42 feet high with a gold-leafed block capping the column.

A citizen of Green River was given this newspaper clipping from a family member from a Philadelphia newspaper. Ripley’s Believe It Or Not was able to be contacted and they found that it was published on December 30, 1990. The caption reads, â€œIn Green River, Utah, there is a 25-ft-long wooden building shaped like a watermelon that is center point to the annual Watermelon Day festival.

END_OF_DOCUMENT_TOKEN_TO_BE_REPLACED 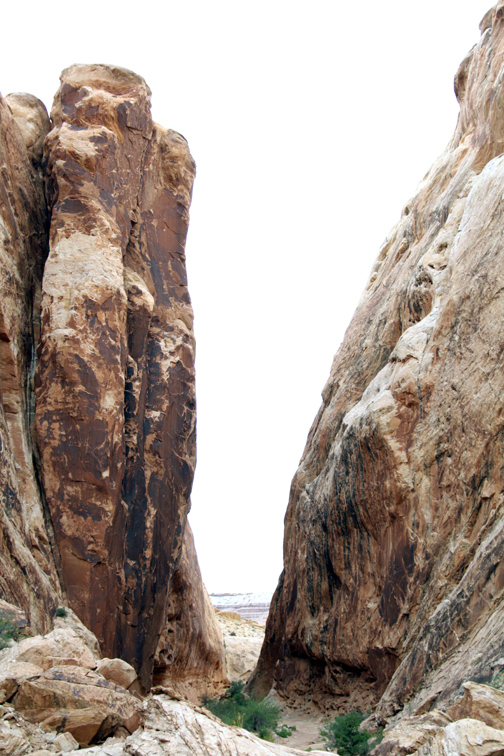 Directions
From Green River, UT, take Interstate 70 west approximately 15 miles. Turn south across the highway on a dirt road after mile marker 145, go through the gate (make sure you close it) and go a little over a mile, on the west there will be a place to park off the road and you will see Little Spotted Wolf Canyon about a quarter mile from the road.

Below is an article from the Salt Lake Tribune about a part of Star Trek being filmed 20 miles from here, in the beautiful San Rafael Swell!

Just off I-70: The planet Vulcan

When the film crew came to Emery County last year, the project bore the unassuming title of Corporate Headquarters.